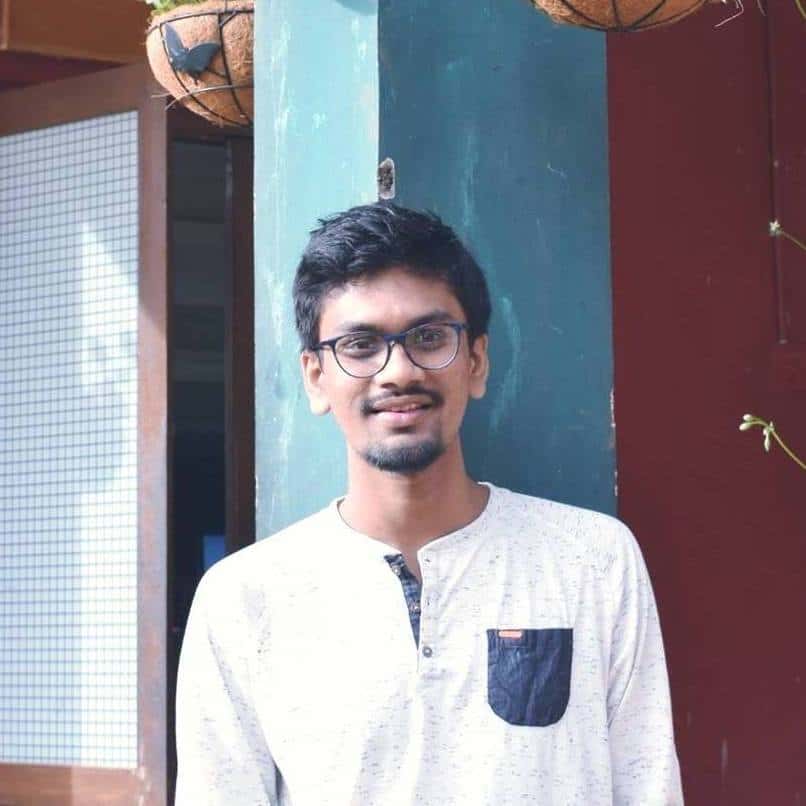 Hi, there. I’ve been meaning to write a post about how we built LeapDrop at the InOut 3.0 Hackathon. We eventually won Best Hardware Hack sponsored by Hackster.io.

Team TheGeekBros has three bros in it: Siddharth Goswami, Soham Dodia, and I.

InOut had lots of tracks this time around, so we got to dabble around various ideas — eventually settling onto building something in the Virtual-Reality/Augmented-Reality track — something that’s been an interest of ours for a really long time.

We had a couple of ideas: a zombie-shooter FPS based on AR, a VR desktop experience (sort of like this). We had a LeapMotion, a borrowed Google Cardboard knock-off, and some two-way tape to piece it all together.

Now, none of us really knew how to proceed with any of the ideas. We didn’t have experience writing code to build VR/AR experiences — just some ideas in our heads — results of all those hours of sci-fi entertainment. So we sat there for two hours, cracking jokes and Googling stuff. It became evident after inefficiently sharing links back-and-forth for a while that it would be practically impossible for us to work on any of our ideas so far. Then it hit us.

We’d been sharing links really inefficiently. I don’t remember how, but maybe it was a Messenger group? We recalled this scene from the first Iron Man movie where Tony Stark movies stuff across computers (and onto a hologram) using just his hands:

Why couldn’t we do this for sharing web pages? We had a LeapMotion that could very well detect hand gestures to do something like this. And thus, we set off to build LeapDrop.

The “stack” consisted of the following:

At the beginning when we were discussing this idea and ironing out the details of how it’s supposed to work, it seemed that this would be a fairly simple project and could be done in a couple of hours — maybe even in half the time of the entire duration of the Hackathon. There’s a(n unspoken?) rule of Software Engineering that almost nothing will ever be built in the time a developer claims it to be. But we did manage to catch some sleep and tweak LeapDrop to work better, so.. ¯_(ツ)_/¯

It was one hell of an experience — nerd jokes, memes, working with the coolest team, and working on things which have no proper set path or guides to develop (those are the best kind). I wouldn’t trade it for anything else. Anyway, here’s a checkpoint. The stuff that follows now is mostly about how LeapDrop works, so if you’re not interested in the nitty-gritty, drop a like by clicking a heart button somewhere on this page if you liked this post so far, and have a great day/night/whatever. 😄

We didn’t have a set path or a guide on how to build LeapDrop. We knew how things are supposed to work in tandem, but had no experience building anything like this — ever.

I had built a tiny (totally unrelated) Chrome Extension earlier, and had written some socket.io code. Siddharth and Soham had experience building Android apps. Siddharth and I had been playing with LeapMotion the previous summer. So we got to working. In an ideal world, I would be building the Chrome Extension, but Siddharth had already started working on it by the time Soham and I started reading the documentation. Soham picked up Android and I got to writing JavaScript for the server.

Here’s a breakdown of what each part of the stack was doing:

The server is the “controller” of sorts. Each device would be connected to it using Web Socket. The server emits and listens to events. It tells the Chrome Extension to show QR Codes, read URLs, and open URLs. It tells the Android App to decode the QR Code in front of it. It listens to gestures from the LeapMotion.

The Chrome Extension is installed on all the participating computers. It connects to the socket.io server. It listens for events and emits them. It shows a QR Code when asked, it sends the URL of the last active tab when asked, and it opens up a URL when asked.

The Android app connects to the socket.io server as well. (It’s a pattern, really. Everything connects to the socket.io server.) The Android app displays what the camera sees, and occasionally decodes QR Codes. It was supposed to be a stereoscopic view, but Android only allows one resource to access the camera at a given time, so we ended up with having the camera-view only in the right part of the stereoscopic view. It was (very) lousy UX, but that’s all that we could come up with at the time. The Android phone goes into the Google Cardboard.

LeapMotion and its JS SDK

If you haven’t figured out by now, the LeapMotion also connects to the socket.io server. However, since LeapMotion cannot directly connect to anything except the SDK, the JS SDK is running on a webpage and the webpage is connected to the socket.io server using Web Sockets. This webpage listens for the pinch and release gestures and notifies the server when they are performed. 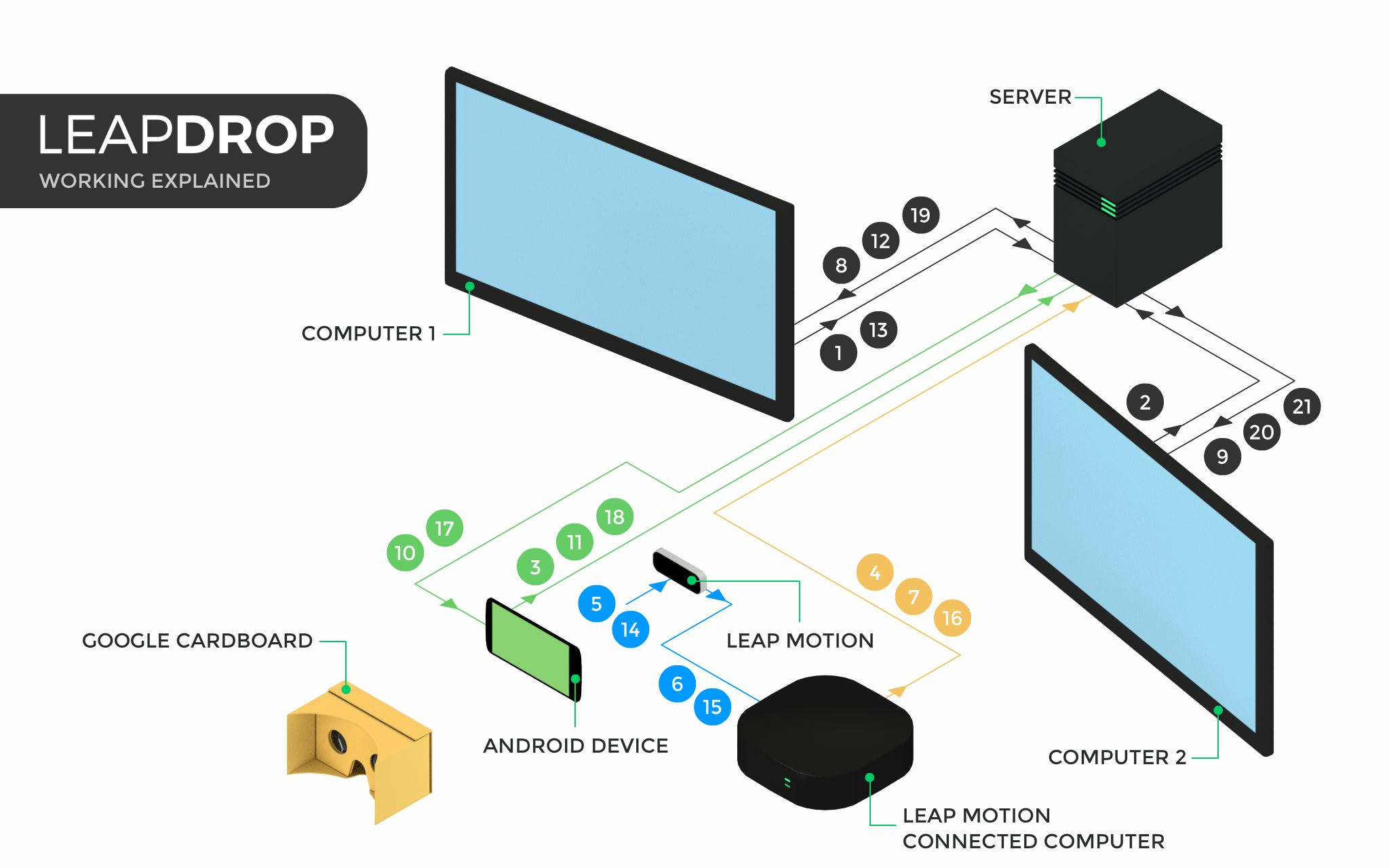 Siddharth is a really great designer as well. He’s the one who created this sweet illustration.

We got a bit of attention from the judges and fellow hackers around us, but unfortunately didn’t get selected to demo on-stage. This was a real bummer, since I can’t help but think to this date, how rad it would have been to grab a webpage from the projector-screen and put it on a laptop on a totally different side of the room.

Anyway, when the prizes were being announced for the Hardware category, I thought maybe we were deserving of the third prize. The third prize was announced and it wasn’t us. I thought maybe we were second since LeapDrop was really cool. The second prize wasn’t us either. I gave up on winning a Hackathon prize this time around. (Paging Imposter Syndrome!) TheGeekBros flashed on the screen as the first prize, and we took a jolly ride to Cloud 9. I had been to the first two versions of InOut as well, but like they say: Third time’s the charm.

Anyway, that’s it for this reeeeally long post. If you’re still reading, thanks for sticking around for this long. 😄